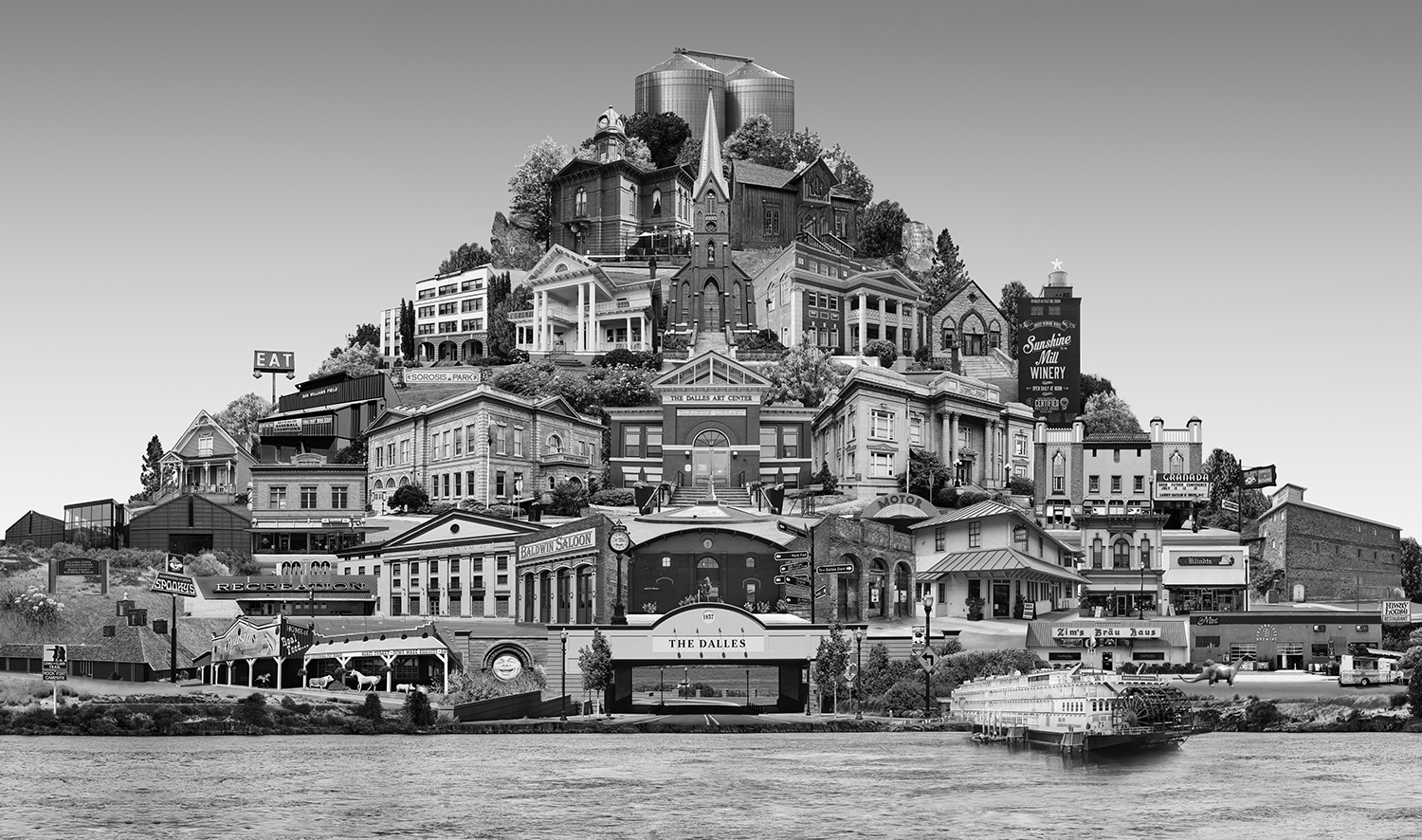 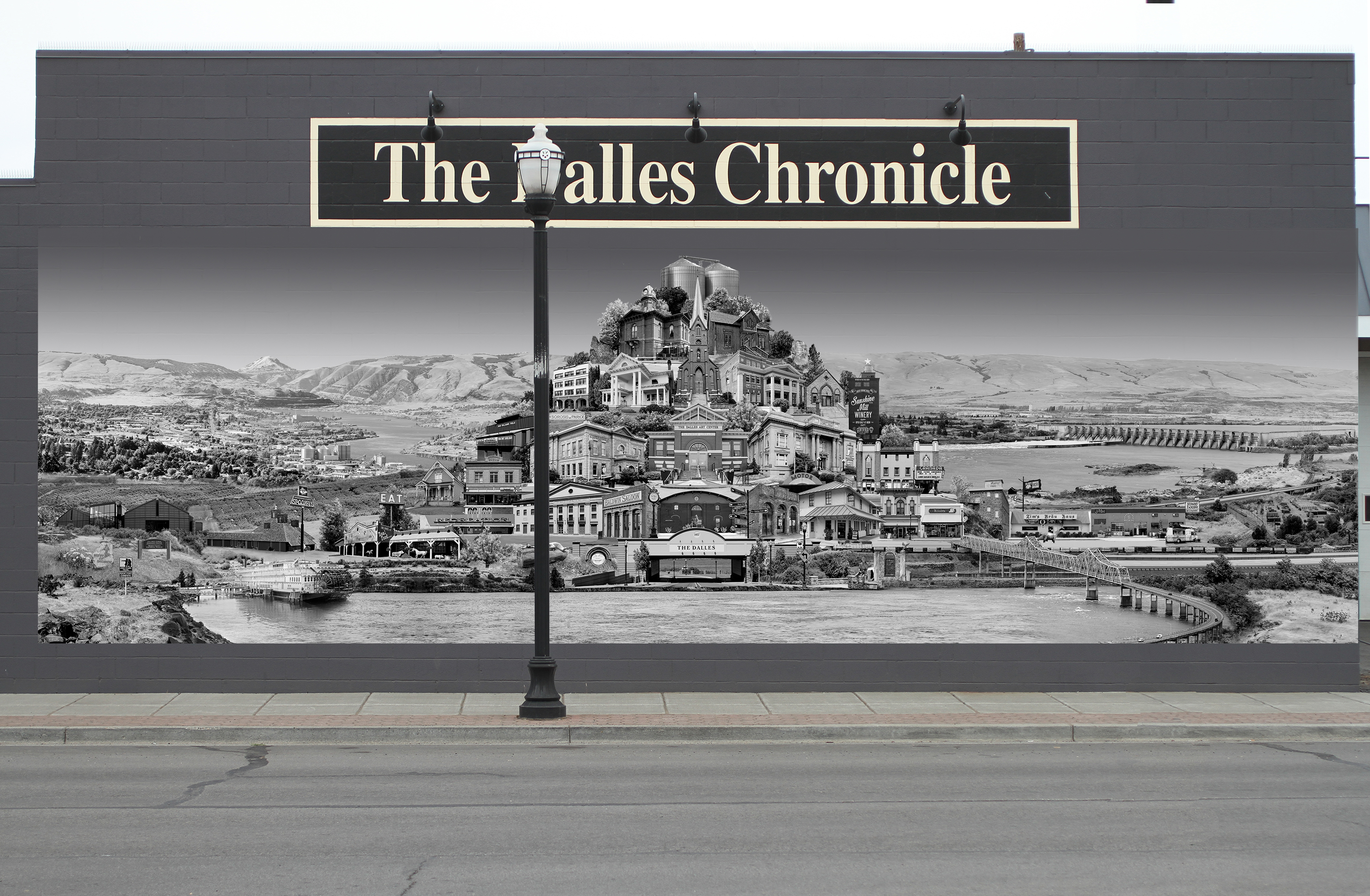 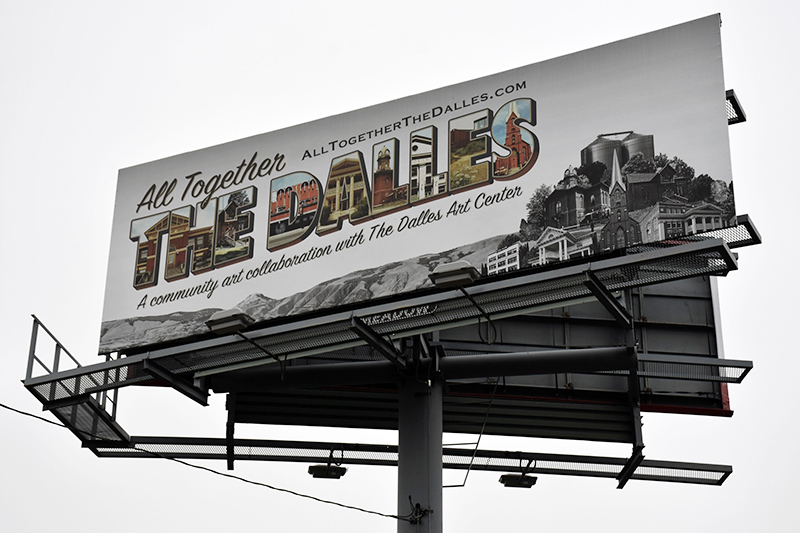 CASE STUDY: “All Together The Dalles”

CLIENT: The Dalles Art Center & City of The Dalles

MISSION/SCOPE OF WORK: The Dalles in Central Oregon is a historic city that has been through many changes with different industries fueling its economy since its founding. When major changes have occurred it risks destabilizing the area, but the area is proudly resilient, constantly rebuilding itself, and always creating value for the State of Oregon. The city is in one of those transition times of great rebuilding and more new people are moving to the area. The Executive Director of The Dalles Art Center, Scott Stephenson, wanted to help further bolster and unify the community through artwork – through the actual imagery, but also through the process of its production. He saw my cityscape work and he realized that with my style of photomontage work, I could help communicate the value of The Dalles, to help build and reinforce city pride.

RESULTS: This truly became a city-wide effort that included The Dalles Art Center, The City of The Dalles, Fort Dalles Displays, and The Dalles Chronicle. I am honored that I got to speak directly with the Mayor, Richard Mays, about the project as well. Also, with the help of local tour guides, historians, and gracious hosts, I was able to thoroughly photograph the area and produce a comprehensive, inclusive photomontage that brings all the unique aspects of the area together. I was able to capture landmarks, historical icons, tourist hotspots, local favorites, local industry, the high desert landscape, and combine them into one scene. Scott Stephenson wanted two prints, one to raise funds to make this scene into a mural, then a smaller print for broader distribution. So, I created two different pieces that both truly represent The Dalles. Then we titled them, “All Together The Dalles”! To announce the project The Dalles Art Center was gifted some billboard space.

Through the Spring of 2020, the amazing realist painter, Chris Pothier, will be painting the larger scene onto panels at the Dalles Art Center using an atelier style tutoring and mentoring people from the community new to mural painting. Then the panels will be installed onto the new Dalles Chronicle building. The image shown is a mock-up of the mural.

PROCESS: A local video production company, Story Gorge, worked with high school students to produce this amazing 4-minute video explaining the process of the project. Here you can see footage of the city, meet Scott, Chris, and myself, and see the mural come into form.

All Together The Dalles with Captions burned on from Story Gorge on Vimeo.