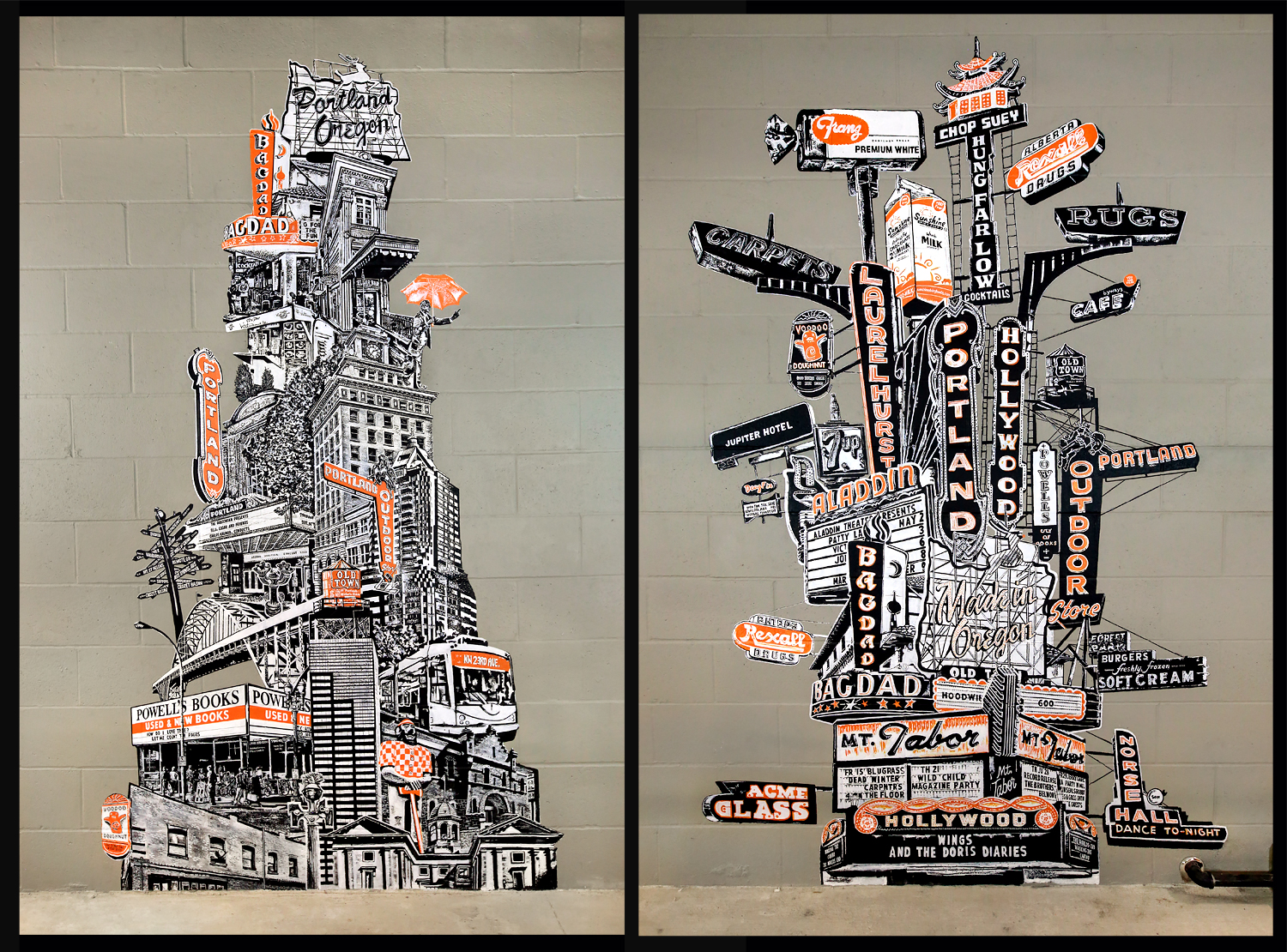 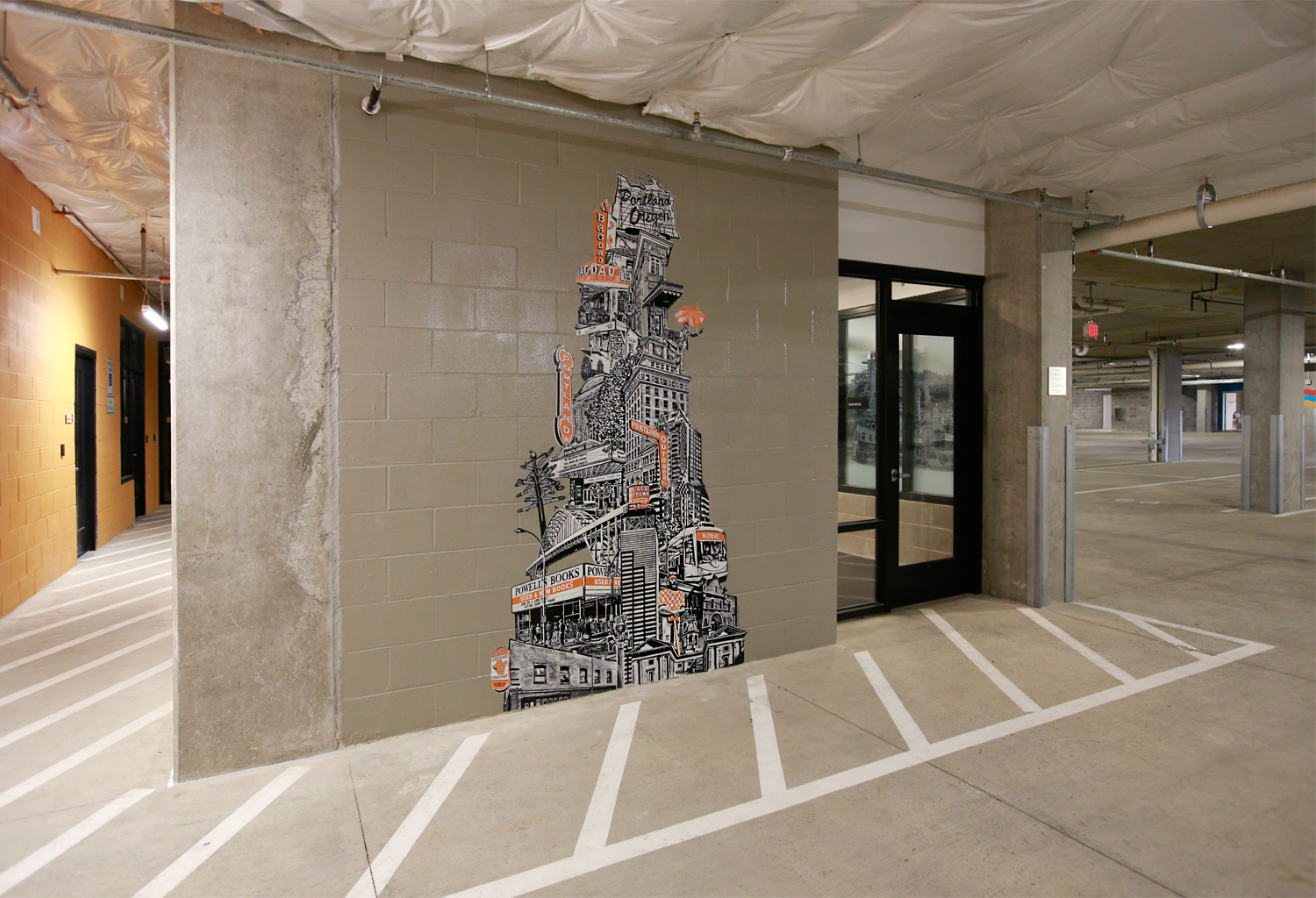 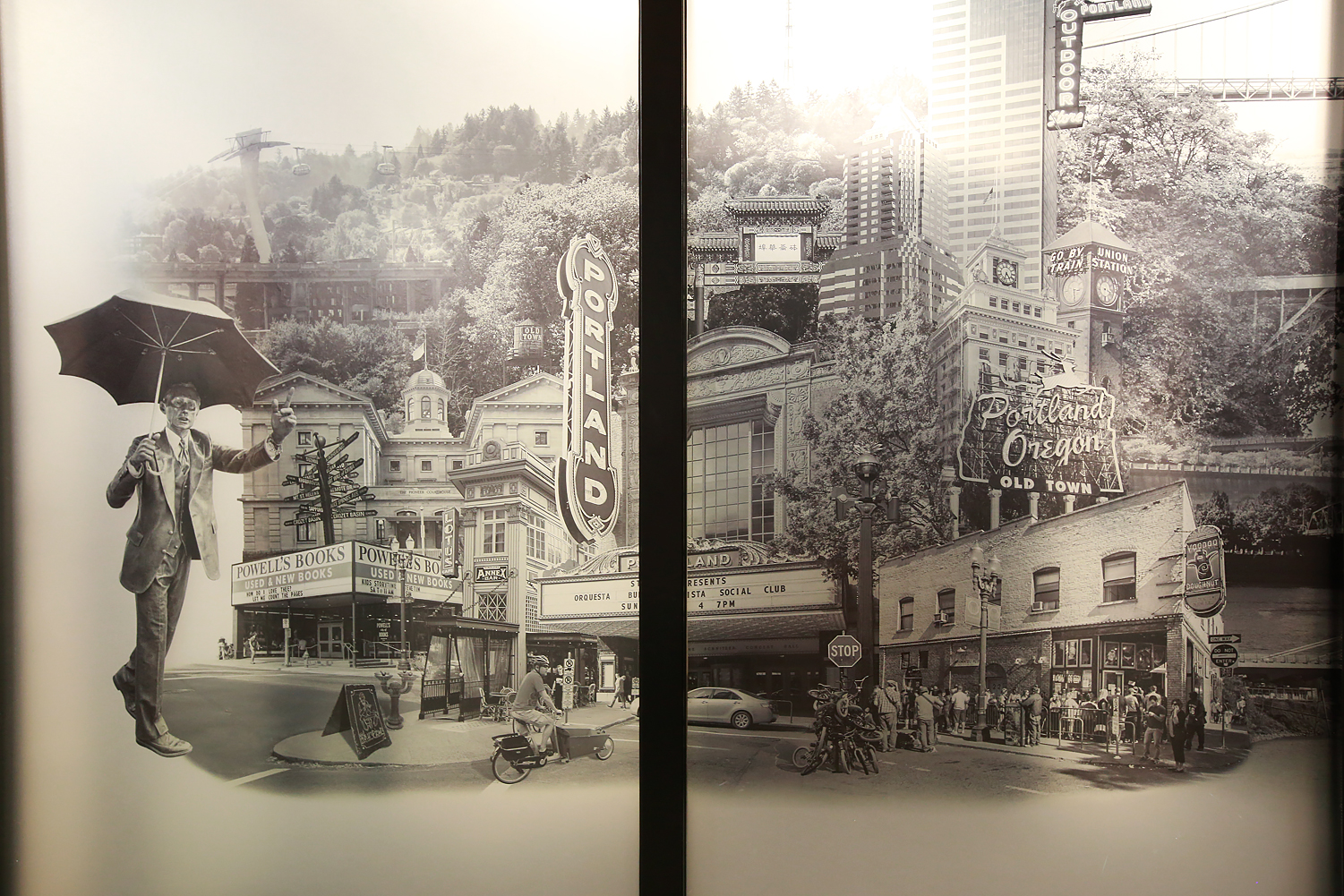 I am very excited about a project I did for the Cadence Apartments building in the Boise-Eliot Neighborhood of North Portland. Four of my images have been incorporated into the building’s structure: three images are hand-painted murals, and one image is a vinyl overlay that is placed on a series of windows. I documented almost every step of process to create these murals. Check out the time-lapse videos of the projects and see how they came to fruition! They are all posted on my blog >

MISSION/SCOPE OF WORK: ConAm Management developed Cadence Apartments, a complex committed to providing chic, contemporary housing for community-minded residents. The building sits on one of Portland’s major bikeways and seeks to celebrate the culture of Portland’s past and present through a series of unique amenities. Keeping passing commuters in mind, the interior designers wanted to incorporate artwork onto the building that celebrates Portland’s allure while maintaining a home-like quality that would attract residents of all kinds.

RESULTS: I worked directly with the client and their interior design team to brainstorm concepts that would highlight the relationship between Cadence and Portland. It was important to celebrate what people love about Portland to demonstrate a sense of place. After careful deliberation, four of my images were chosen to personalize the building as a landmark within the community. The images chosen embody the city’s culture, offering a sense of nostalgia to Portland natives, and perhaps wonder, to newcomers.

Three of the images were hand-painted as murals on the inside and outside of the building. When deciding on the placement for the murals, the client emphasized the importance for ensuring that the exterior image would be visible to passerbys as well as welcoming home residents. “Watching Over Portland” is featured prominently across the entrance to the parking garage, facing N. Vancouver so that passing cyclists can break the routine during their commute.

The other two murals are located inside the parking garage, on the sides of the elevator vestibule. Here, various Portland landmarks welcome residents home. To achieve the elevator murals, my images “Tower of Portland” and “Portland Marquee Totem” (both originally photographic images) were converted into custom line art form to match the exterior mural, then hand painted.

I teamed up with muralist, Caleb Jay Maltsberger, to make the three hand-painted pieces. With his specific expertise, we were able to successfully transfer my fine, detailed scenes onto the walls.

Color was carefully considered during this collaboration. The outside of the building has bright orange panels standing out from the building, giving the structure distinction. It was important to the client to keep the color scheme and it was requested that this orange was part of my artwork. I incorporated this color into all three of the pieces and we procured a custom-made color to use in the murals.

For the fourth image, the client wanted showcase an image on the front windows of the elevator vestibule that could demonstrate Portland as one unit. To execute this, “Portland: East Meets West” was kept as a photographic image and created into a vinyl overlay. As a cohesive piece this image demonstrates the entire city in one scene: West side landmarks, East side landmarks, and some of the major bridges connecting the two.